Manchester City are still waiting for their moment of Champions League glory, but by winning the rac

Manchester City are still waiting for their moment of Champions League glory, but by winning the race to sign Erling Haaland they have established themselves as a go-to destination for Europe’s top talent.

The 21-year-old goalscoring phenomenon had his choice of the continent’s top clubs thanks to a reported buyout clause of 60 million euros (£51 million, $63 million) that saw him leave Borussia Dortmund well below his market value.

By comparison, Liverpool are set to spend up to 100 million euros for the far less-hyped Uruguay forward Darwin Nunez from Benfica.

Real Madrid wanted Haaland at the Bernabeu next season, Barcelona sought him as a successor to Lionel Messi, while Bayern Munich again aimed to swoop on their Bundesliga rivals.

The Norwegian, however, will instead line up in City blue next season, just as his father Alfie-Inge did between 2000-2003 during a very different era for the club.

“First of all my father a little bit,” said Haaland when asked why he choose City. “I was born in England, I’ve been a City fan my whole life. I know a lot about the club.

“I feel at home here and also I think I can develop and get the best out of my game at City.”

The arrival of petrodollars from Abu Dhabi has long since transformed City’s fortunes, with Pep Guardiola’s men having won four Premier League titles in five seasons.

But Haaland is the man City need to fill a void if they are to reach the next level — a superstar striker.

City have played the best part of two seasons without a recognised number nine.

An attempt to land Harry Kane as Sergio Aguero’s successor fell short last summer and it may have cost City another shot at Champions League glory.

Despite beating Real Madrid 4-2 in the first leg of their semi-final, Guardiola’s men missed a series of sitters to put the tie to bed.

That came back to haunt them last week as Real miraculously hauled themselves off the floor to score twice in the final seconds of the return leg on route to winning the competition for a 14th time.

Haaland, however has scored 23 goals in just 19 Champions League appearances for Salzburg and Dortmund.

What remains to be seen is how well he can be embedded into Guardiola’s system.

League titles won with Samuel Eto’o at Barcelona, Robert Lewandowski in his time at Bayern Munich and Aguero in his early years at City dispells the notion Guardiola’s football cannot accommodate a number nine.

“I think I can develop a lot under Pep and in this club. I think I can get better in a lot of things and hopefully I can score a lot of goals,” said Haaland.

But the recent story of City’s success under the Catalan coach has been one of collective brilliance.

Riyad Mahrez was their top scorer last season with 24 goals in all competitions this season, ahead of Kevin De Bruyne (19), Raheem Sterling (17) and Phil Foden (14).

Not all superstar signings have gone as planned for Guardiola in the past.

Haaland’s arrival has sparked comparisons with Zlatan Ibrahimovic’s ill-fated season at Barcelona in 2009/10.

And Jack Grealish, despite costing City £100 million to make him the most expensive player in English football history, spent much of his debut season on the bench.

But by landing one of Europe’s hottest properties, City are also looking to a future beyond Guardiola, whose current contract runs out in 2023.

“His rise has been remarkable, but he is still only 21” said City’s director of football Txiki Begiristain.

“His best years are ahead of him, and we are confident he can get even better working with Pep.”

Now Haaland and Guardiola will have at least one season together to try to satisfy City’s desperate desire for a first Champions League title. 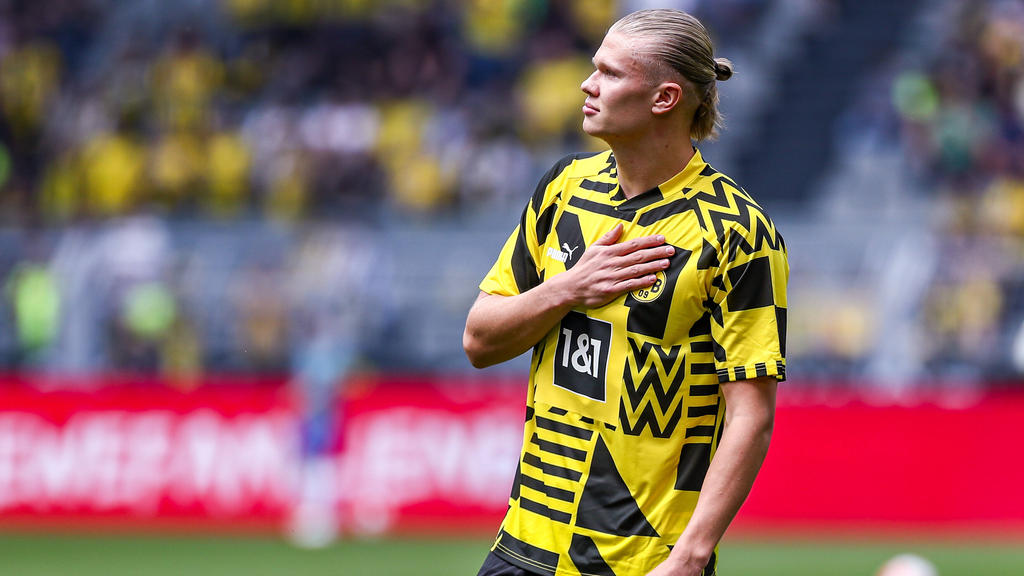